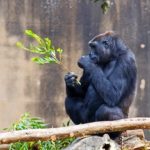 I’ve learned much from both my favorite t-shirt and a ticklish gorilla about identity development, self-awareness, and building a life that’s likely to be fulfilling.

First, for the t-shirt.  My favorite t-shirt has a little label sewn on it that says, “Do what you like, like what you do.”  I’ve thought a lot about this.  How is it that we can come to know what we’ll like to do?  It’s a question that I believe is related to identity development and self-awareness—areas that I’ve long been interested in as a psychologist, psychotherapist, and college professor.

How can we come to know who we are and what we’ll like?

Can we think our way there?  Can we read about options on the internet, consider our intellectual strengths and temperament, select a path, and live happily ever after?  Or is there benefit to meandering along unplanned trails, getting dusty and sweaty, and feeling the warm sun on our face?  Which approach will provide us with a more fulfilling journey as we proceed through life?

I spent the entire summer after graduating from high school, thinking about exactly what college would be like.  I read about it, dreamed about it, and had long discussions about it with my dog Louis, until I thought I had it all planned out.  I would be a French major and then go on to Law School.  And I would establish a law practice in Paris.  It all made perfect sense.  I loved French poetry and had taken French since the 3rd grade—something not uncommon on the east coast—and so was pretty good with the language.  I was analytical.  And I thought Paris was a beautiful city.  And so, here I am, today, a lawyer in Paris…  My point is that I really had no idea what would be in store for me over the next few years.

So, I began my first year in college as a language major.  The only field I’d ruled out was psychology—I thought that psychologists must be, by and large, strange people and kind of scary.  But then, one day as I was stumbling through the halls on my way to a class, a psychology professor stopped me and asked if I’d like to run a study with him.  What kind of study could one run in psychology anyway, I thought?  Fortunately, I said, “Sure,” thinking of it as an opportunity to try something strange—strange, like eating chocolate-covered ants might be strange.  But he soon had me researching in the library, constructing questionnaires, running all across campus to collect participants, learning about stats so I could analyze the findings…  If I’d stopped and reflected on what he’d have me doing before I jumped in, I never would have said yes.  I never would have considered psychology—a field that I’ve now been very happily working in for most of my life—if a professor hadn’t encouraged me to “try it on.”

Now for the ticklish gorilla.  A delightful article by Bering (2010) was published in Scientific American several years ago.  It was about evidence that animals have a sense of humor.  I’d like to share this excerpt from the article:

When I was 20, and he was 27, I spent much of the summer of 1996 with my toothless friend King (a 450-pound Western Lowland gorilla, with calcified gums), listening to Frank Sinatra…, playing chase from one side of his exhibit to the other, and tickling his toes.  He’d lean back…, stick out one huge ashen grey foot through the bars of his cage and leave it dangling there in anticipation, erupting in shoulder-heaving guttural “laughter” as I’d grab hold of one of his toes and gently give it a palpable squeeze.  He almost couldn’t control himself when, one day, I leaned down to act as though I was going to bite on that plump digit.  If you’ve never seen a gorilla in a fit of laughter, I’d recommend searching out such a sight before you pass from this world. (para. 2)

Now, a lot has been written in the field of psychology about identity development.  And, with the help of neuroscience, a helpful distinction is starting to be made between identity and self, putting words to elements that are related but actually quite distinct (Gerson, 2014).  Identity refers to a self-reflective third-person understanding of oneself, whereas self is a more primitive and core first-person sense or experience of oneself.  Early on, we move from a purely personal experience as and become more reflective, as we become socialized and develop language (Gerson, 2014).  We no longer merely experience with our senses, as we develop tools to reflect on and think about our experiences.  We become our own observers.  This development represents identity (me), as opposed to self, which involves our personal experience as an I.  Our gorilla friend probably experienced more self-ness than clarity about his identity—but that’s for ethologists to verify.  Human adults, on the other hand, often lose touch with their basic self.

If I asked you who you are, I might get a variety of answers.  You might say “an adult,” “a generous person,” “a teacher,” “a psychotherapist,” and so on.  These would tell me a little bit about your identity—descriptions that derive from observations of or reflections about yourself.  But, now take a moment, and think back to your earliest remembered experiences.  Try to experience what it felt like being you at the time, not as an observer, but as a participant.  Did you feel excited, timid, curious?  Now, you could probably tell me something about your self.  Probably something our gorilla friend was acutely aware of during the play experience.

My experiences with my psychology professor had transformed both elements.  They had changed not only how I thought about who I was, but also how I experienced my self, in the first person—I.  And redirected me down a path that has allowed me to build a life doing what I really love.

Erikson (1959) (who did not distinguish in his writings between self and identity) wrote about the value of moratoria in identity development.  I believe first-hand experiences are important for becoming aware of the paths that will be consistent with the self and lead to an optimally satisfying life.

Gerson, M. J. (2014). Reconsidering self and identity through a dialogue between neuroscience and psychoanalytic theory. Psychoanalytic Dialogues, 24(2).