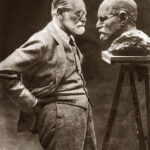 Perhaps the single most representative concept of psychoanalysis is that of psychological determinism.  By this I mean a fundamental belief that human behavior, consciousness, and experience are determined or explainable.  Freud followed in a scientific tradition that was dedicated to uncovering the laws and mysteries of life, hopefully to lead to a comprehensive theory of the mind.

Is Action Accidental or Random?

Such an approach would never be satisfied with a conclusion that suggested that a certain action was “accidental” or “random” or that a thought occurred strictly from a spontaneous, meaningless neurochemical action.  Unlike radical behaviorism or even social learning theory, which propose to account for some behaviors as incidental contingencies or fortuitous accidents, psychoanalytic thinking would tend to view such explanations as naïve, simplistic, or superficial.

What Does Psychoanalysis Tell Us About Action?

Psychoanalysis proposes to describe mind and behavior as meaningful and understandable.  Thus, our lives are the products of our being.  Our intentions, as well as our accidents, are worthy of understanding.  While critics may argue that psychoanalytic theories make too much out of too little, the supposed error is committed in the pursuit of knowledge, with an implicit expectation and respect for the complexity of life.  It should also be noted that such an attitude is reflective of an appreciation for the humanism of psychology, not its mechanization or reduction to biochemistry.

What is the Focus of Psychoanalytic Explanation?

Even if one could demonstrate, once and for all, that the universe and life are random, nonsensical phenomena, this would not contradict the view of determinism.  The focus of psychoanalytic explanation is on the human experience of life.  What is characteristically human is our mind’s proclivity for making sense out of nonsense.  We cannot tolerate being in a state of uncertainty or confusion.  Psychological determinism addresses this characteristic of being human by suggesting that all human knowledge, no matter how sophisticated, abstract, or profound, is always, ultimately, human.

Freud and Breuer’s Studies in Hysteria

Freud’s and Breuer’s Studies in Hysteria are classic examples of the humanity inherent in a view of psychological determinism.  In their investigation and treatment of hysteria, they stressed how patients’ peculiar behaviors stemmed from important but forgotten episodes of their lives.  Hysteria, understood in the context of a person’s life, represents a meaningful continuity of being, such that the mental life of the patient is respected as relevant and the patient is further accepted as exhibiting psychological processes common to humankind.  The “logic” of symptoms soon led to an appreciation for the logic of dreams, mistakes, jokes, and slips of the tongue.  With acceptance of determinism, we can never take life’s events for granted again!

For more on psychological determinism and other psychoanalytic concepts, see the course Classical Psychoanalytic Theory.  If you would like to receive a specialization Certificate in Psychoanalytic Psychotherapy and learn more about issues of interest, please see our home study psychology continuing education courses, available online.